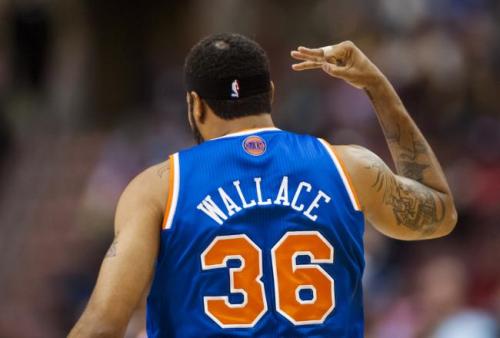 The Wolves take on the Knicks Sunday afternoon at MSG

Coming off a signature win over the West-leading OKC Thunder, the Wolves take on the East-leading Knicks Sunday afternoon at Madison Square Garden.  The 13-11 Wolves will be without Kevin Love, who played one of his best one or two games of the season on Thursday, with 28, 11, and, perhaps most indicative of the way the Wolves played against OKC, a season-high 7 assists; the Wolves moved the ball better against the Thunder than in any game this season, and with only a minimal contribution from point guard extraordinaire Ricky Rubio, who’s still on a limited-minutes program as he completes his comeback from a season-ending knee injury.

Love’s minutes will be divided between much-maligned Derrick Williams and Dante Cunningham. Just when you think Derrick Williams won’t get any more chances, someone gets hurt, and Derrick Williams gets another chance. So far, he’s never done anything with any of them. Cunningham has exceeded expectations this season, and should give the Wolves the kind of steady but unspectacular performance Wolves fans have become accustomed to. The Wolves offense tends to flow better when Love isn’t on the floor, but there’s still no replacing his 20 & 13.

The Knicks are more than a worthy opponent, Love or no Love. A few things to watch for:

Check in over at KnickerBlogger, where one of our favorite Twitter personalities Jim Cavan (@jpcavan) writes, for more coverage.

UPDATE (2:32 PM): It appears Sheed won’t be on the floor to brighten our day after all. The world’s loss.

Comments Off on Intel Report: Timberwolves vs. Knicks