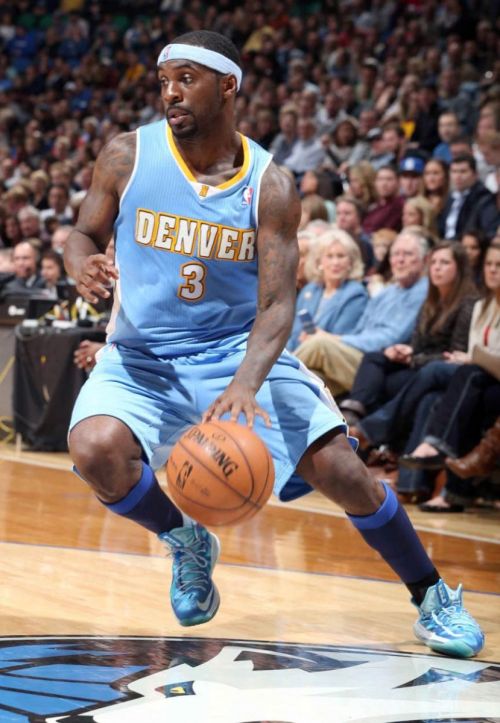 One day after Kevin Love’s disgruntled comments about the Timberwolves were published (see Andy G’s and my analysis here), the  Wolves play the Nuggets at Target Center tonight at 7 PM CST. Love is expected to be in the starting lineup. Despite the much anticipated return of Ricky Rubio, it currently appears as if that won’t happen for at least a few more days.

So what do we have in store tonight?

Ty Lawson is the big concern for the Wolves. The former Wolves draft pick has matured into a good NBA point guard, a very legitimate starter and  a borderline star. Lawson, 25 years of age, is scoring a bit less and assisting a bit more this season than last, as you might expect from the starting point guard on a team that retooled after last season, adding Andre Iguodala.

Iguodala, an advanced stats hero, whose basketball-reference.com page is sponsored by Wages of Wins, was a preseason darling among prominent bloggers like Ethan Sherwood-Strauss. Sherwood-Strauss went so far as to posit that the best “long shot” MVP candidate for basketball bettors was Andre Iguodala.

“He didn’t say that Iggy would win the MVP, or even that he thinks he has a good chance at it or would ever deserve it, but that “[a]mong fool’s bets, Iguodala for MVP is wisest.” The logic was that Denver had a chance to win a ton of regular season games (some predicted upwards of 60), that MVP voters sometimes use a “This team won more games that they were supposed to, so [Player X] deserves the credit!” logic, and that Iggy would enjoy a scoring/production bump as he transitioned from Doug Collins to George Karl, a shift that would be akin to a McDonald’s All-American transferring from Bo Ryan’s Wisconsin Badgers to Kentucky or North Carolina.”

There’s a long season left to play, but so far, the evidence suggests that logic was flawed:

Also: former Wolves love-him-or-hate-him lotto pick Corey Brewer has been playing well lately for Denver. Brewer has scored 15 or more points, off the bench, in four of his past five games. Brewer might score some buckets tonight, particularly if Active Defender Andrei Kirilenko ends up matched up elsewhere.

As for the Wolves?

Well, for starters, there’s no Rubio. And the Love thing hangs like a cloud over the team, though Love has apparently recanted a bit.

Moreover, Brandon Roy may never play again, and that might not matter.

We hope AK47 can stay healthy.

Alexey Shved is still a rock star in search of enough minutes.

What does all this mean? Despite the uncertainty about what’s happening, there’s also a lot of status quo going on. At least that’s my read.

What else should we be looking for?

Comments Off on Preview: Nuggets vs. Timberwolves