INBOX: What You Need to Know as the Wolves Enter the Preseason 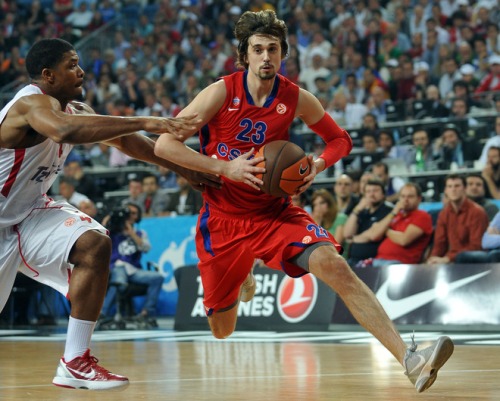 Can Shved man the point in Rubio’s stead?

Andy G: The team has returned from Mankato with optimism abound.  Is it something in the air?  Or was it Mrs. Taylor’s home cooking?  Why is everybody so jacked up about this Wolves team after only a handful of practices?

Patrick J: We should be optimistic because Rick Adelman is optimistic. Not one to mince words, Adelman was adamant during last season’s training camp about how sloppy the team looked. His words foreshadowed the truth, and the team had a lot of trouble with turnovers and ballhandling in general. This season, we keep hearing things from Team Adelman about how this group “knows how to play.” And not just the vets–praise keeps getting heaped on newcomers like Alexey Shved, who’s in the running to get major minutes at the point, and Derrick Williams, who was anything but an Adelman favorite last year. I don’t think Adelman’s doing charity for these guys’ egos–I think what he sees is what we were all hoping he’d see: a vastly, vastly improved team.

Onto specifics: There are a few key things to watch for in the preseason. #1: Is Alexey Shved a point guard? Should he get the bulk of the minutes there over Barea? (I suppose this question is actually two questions, since it assumes BAREA is a pg, which I’m not so sure about.)

Andy G: Good call starting with Shved. Apparently, he’s having issues with the LANGUAGE BARRIER.  Not so much at the club with Pek as when he’s trying to bark out Adelman’s plays. Kevlar seems mildly annoyed by the communication problems. Along with a Rosetta Stone purchase (do they do an English version?) Shved just needs more time in an American locker room and in an American city. Of course, the elephant in the room, or at least this conversation, is that with Ricky out for a couple months we need Shved to play point guard NOW, not in the future. By the time Shved learns the language, he’ll be moved off the ball and relieved of most speaking duties. (PARADOX!)  In terms of skill set, Shved has the look of an NBA point guard. He’s skinny, which our rules protect from too much contact, and he thrives off of pick-and-roll sets and pull-up shots.  If they can simplify the oral commands, I think Shved can play point. Even if his English is less than perfect.

Next question that begins with yesterday’s quote from Kevin Love:

“If I have to sacrifice points for our team to win, so be it.  I don’t think it’s gonna drop…too much.  Coach still says I’m going to be a large focal point of this offense.  He wants me to look for passes a lot more and that’s kind of, since the start of camp you know I’ve been looking for, whether it’s taking the ball in transition whether it’s hitting guys from the high post, me getting double teamed on the low post, just looking for guys and guys are really flashing and looking, and Pek is ducking in…”

Actually it’s two questions.  First, what do you think Kevin Love will average per game this year?  Last year’s 26.0 seems high, but I always underestimate what Love is about to do.  Second, what do you think Love is actually thinking about points per game?  See the bold, italicized text above. He seems conscious of this stat.  No matter how much points per game is brushed aside by Love’s biggest supporters, it’s a noisy stat for accolades.  Curious what you think about it.  Minnesota likes to psychoanalyze its Superstar Kevin Timberwolves.  KG couldn’t handle the “Alpha Dog” role…until he was the best player on a mini-dynasty in Boston.  What can we say about the inner workings of K-Love?

Patrick J: I hate getting too hung up on Love’s psychology about NUMB#RS, but it seems like that drive he has to put them up is as important as the physical aspect of the game for him. So it’s worth thinking about.

To answer your first question–How many points per game will Love average this year?–I think it will drop, and should drop, if he’s doing his job. Look at this year’s roster compared with last season’s–it’s not even comparable. I’d like to see Love try to average 20, 15, and 5–those would be some NUMB#RS I could get behind. Because that’d be almost double his career high assist-per-game average.

To answer your second question–What is Love actually thinking about the possibility of a reduced scoring role?–I’m sure he hates it. He clearly thinks he’s far better than his teammates, and in many ways, he is. Is it immature to insist on showing that off, or *proving* it through NUMB#RS? Yes. Yes it is. Love is still in many ways a Young Pup, but he shouldn’t need to be a Lone Wolf–especially if Brandon Roy and Nikola Pekovic are playing to their abilities.

Next question: What’s your best guess at a “beginning of the season” depth chart, with minute breakdowns of your starters and reserves?

Andy G: You already know my estimates once Ricky returns to health.  But for opening day?  Here goes:

PG – Luke Ridnour – 32 mpg (Would be higher, but he’s having some back problems.)

The good–Love’s assists. I think he responds to the murmurs about his passing (it hasn’t just been us) and comes out wanting to show what he can do. I think he could average about 4.5 APG.

The bad–Rubio’s number of games played. I have a feeling in the pit of my stomach that Rubio’s rehab takes longer than people expect. Even though he’s young and in good shape, he isn’t particularly strong and he might be more susceptible to re-injury than we think. Let’s hope not.

To the readers: What do you think are the most interesting unanswered questions heading into the preseason?

Comments Off on INBOX: What You Need to Know as the Wolves Enter the Preseason