Unrig the Lottery: The Most Obvious (And Important) Hoop Idea 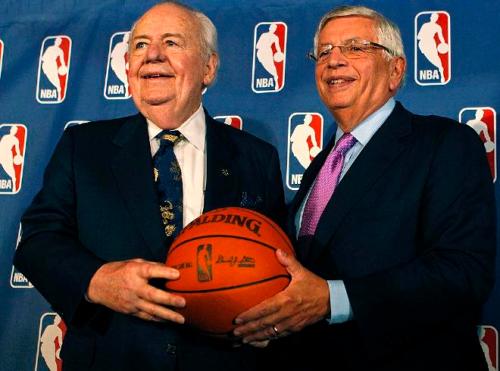 Tom Benson and David Stern (Photo by The Sporting News)

The New Orleans Hornets have claimed victory in the Anthony Davis sweepstakes, winning the NBA Draft Lottery on Wednesday night despite having only a 13.7% chance of getting the first pick. Is anyone really surprised?

The NBA–run by larger than life commissioner David Stern, who presides over the lottery and announces the selection order after its determined in private–still owns the Hornets. Stern trotted out Tom Benson, who has agreed to buy the team and keep it in NOLA, to be the franchise’s face for the nationally televised lottery show, but Benson doesn’t own the team yet and probably shouldn’t have been there. The whole thing would’ve felt more genuine if Adam Silver had been there representing the Hornets.

NOLA’s gonna love Anthony Davis. What’s not to like? He may be the best defensive prospect since the 1980s. And Benson has to be happy–the return on his investment just jumped. If he re-signs Eric Gordon and does something smart with his other lottery pick, the Hornets could be in OKC territory sooner than later.

There’s no evidence the lotto was rigged. That’s the beauty of it–there couldn’t be. And yes, there are other places Stern could’ve planted Davis–Charlotte, to salvage MJ’s shipwreck, and DC, to be John Wall’s running mate, come to mind. But why trust Stern and some faceless guys from Ernst & Young when the whole thing could be done on live TV? There’s no reason to conduct the lottery in private, except to control who goes where.

If the NBA wants fans to  restore its integrity after black eyes like the Donaghy scandal and the lockout, making the lottery public would be a good start.

Update: Adrian Wojnarowski (unsurprisingly) has a provocative story on this topic. Surprisingly, it’s actually worth reading.

Comments Off on Unrig the Lottery: The Most Obvious (And Important) Hoop Idea