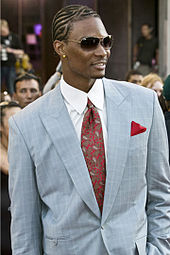 Chris Bosh will be suiting up the rest of the playoffs

Andy G: It’s been announced that Chris Bosh will be out indefinitely with an abdominal strain.  While “indefinitely” is ambiguous and Spoelstra says the MRI results were a pleasant surprise (no tear, apparently) it sounds like there’s a good chance that Bosh will miss multiple games and possibly even the rest of the Pacers series.  We know how good the Pacers are.

What does this injury mean for the already-injury-riddled Playoffs?

Patrick J: I suspect it doesn’t mean that much. I’m probably just trying to CURB MY ENTHUSIASM about the Pacers’ new, improved prospects for advancing, but shifting LBJ to the four and giving Battier and Mike Miller more time probably won’t kill the Heat. They still have two of the three best players in the NBA.

Andy G: That could be true, but I think you’re underestimating what this does from a MATCHUPS perspective.  While Bosh is the distant third of Miami’s Big 3, he’s a floor-spacer who clears the paint for LeBron & Wade Paint Destruction.  Take away Bosh and you have more help defense on those dribble-drive sets, for which Indy already has the great PAUL GEORGE defending on the ball.  I think this injury, if lasting for more than a couple games, makes Indy the favorite, even if only a slight one.

But enough X’s and O’s.  We both know that LeBron in the Playoffs is the most interesting narrative going in today’s NBA.  Let’s assume Bosh is out for a couple weeks, extending through this series and (if necessary) into the next one against Boston.  What happens to LeBron if he prevails without Bosh?  What happens if he doesn’t make the Finals?

Patrick J: Fair points; again, mostly knee-jerk wishful thinking, since the Pacers are my favorite team left in the playoffs now that Memphis is out. In terms of the narrative–or “NURRATIVE”, in Barkley-speak–a few things.

At least that’s how I think it’ll play out. There’s an oversimplified, boring story that’s consistent with any outcome. I think Bosh is underrated now–losing him to injury is likely to really hurt the Heat’s title prospects. So if I ran the media, I’d REORIENT the nurrative to what the injury tells us about Bosh and his value rather than continue to beat the dead LeBron horse. But that wouldn’t make money.

Andy G:  I think you’ve pretty much got it there.  But there’s one added dimension that we’ll see unfold, which is the LeBron-Wade Dynamic.  We hear plenty about Wade being an ALPHA DOG and LeBron being more like Magic (is this really a criticism?) or Pippen (same question).  But I know we both agree with aforementioned Barkley that “the Heat will go as far as LeBron James takes them.”  SHOULD LeBron face any criticism of the Heat go down with Wade Guns a Blazin’ and LeBron playing second fiddle?  That’s kind of exactly what happened last year against the Mavs (and it’s DEFINITELY what happened in 2010 versus Boston, but that one sounds like there were external factors at play), and I thought it was fair to blast James for not putting it all on the floor.  What do you think?

Patrick J: I think LeBron always puts it all on the floor; the question is, is he always the best player in crucial moments of big games. So far, the answer is “no”. That can change over the course of a guy’s career, once he slows down a bit both physically and mentally and develops the comfort and concentration necessary to perform during #winningtime. Will LeBron do that? I have no idea. But right now–and to answer your question–I don’t think he SHOULD face criticism if they lose with Wade as the go-to during crunch time because Wade should be their go-to guy in crunch time. We had this conversation OFFLINE yesterday, except it was about the Celtics and the relative value of Rondo and Pierce. You noted that people who gave him MVP votes must be impressed with his triple doubles. I concurred, but then said I’d always want The Truth driving the bus in any Game 7. It’d be a huge bonus to have a productive Rondo riding along and doing what he does, but Truth is better/more suited/more experienced in those moments, and that’s what matters. Basically, all of this argument applies to the LeBron/Wade dynamic too. LeBron is the better player overall and can stuff those stat lines, but that doesn’t matter in #winningtime when you’ve got a Wade on your team. Again, I think that people can’t separate what they want LeBron to be from the objective situation he’s in, and that conflating the two leads to some false premises about how the Heat should devise their playoff strategy and who should be held RESPONSIBLE for various outcomes. Maybe they’re right, but I just don’t see it the same way.

Andy G: Here’s where I’ll disagree with the Rondo-Pierce comparison: I don’t think that Rondo is actually as good as Paul Pierce at creating reliable offense–I just think he’s WAY-better conditioned to do it for long stretches of a game.  But Paul’s lumbering style, now very-reliant on a ball screen to create separation, is what the C’s want during #winningtime or for longer stretches of a particularly-big game (like Game 2 at Atlanta.)  But LeBron isn’t only as good as Wade, he’s better.  He’s better at scoring and he’s better at passing.  I’d rather have the ball in LeBron’s hands for every second that he’s on the court.  (Which is why Wade should be a 6th Man, but I digress.)  Remember when LeBron did this?  Or what about this?  If you can remove the stench of the Celtics and Mavericks meltdowns (not easy to do at this time, during the 2012 Playoffs, I’ll grant you) you’ll remember how great LeBron can be in big moments.  Why he stopped trying in 2010 we don’t know–we can only guess.  Why he either wore down, stopped trying, or got rattled during the Mavs series last year is another good question.  But there’s ample evidence out there that he can carry a mediocre team deep into the Playoffs and it’s puzzling to me that he sometimes seems to forget that when he defers to a lesser player; even one as great as Dwyane Wade.  Any parting thoughts?  This should be interesting to follow; much more than if a Healthy Big 3 steamrolled the Pacers and Celtics/Sixers en route to the Finals.

Patrick J: I take your points–they’re interesting and suggest some fascinating puzzles for debate. But I think about this as analogous to an optimization problem: LeBron is better than Wade (as you correctly point out), but is he always better? Or is he better 97 percent of the time, but Wade is, on average, more likely to get you the outcome you want during the other 3 percent–which you (Erik Spoelstra) can identify? This is where I think you forget about HERO BALL and play the odds. Yes, LeBron CAN/HAS delivered in some playoff series and 4th quarters, but they all seem to believe Wade is more likely to in THE MOST IMPORTANT situations. Given that Wade is still REALLY, REALLY good, I have to trust that they know better than I do that he’s more likely to produce. It’s a bummer that LeBron hasn’t surpassed him during that 3 percent, but I don’t think he has yet. Still having him around to do what he does during the other 97 percent would be huge–regardless–in getting the Heat to that situation–that’s why he’s the MVP.

Comments Off on INBOX: Assessing the Heat’s Playoff Prospects