The Tense Disconnect Between Adelman and Rubio 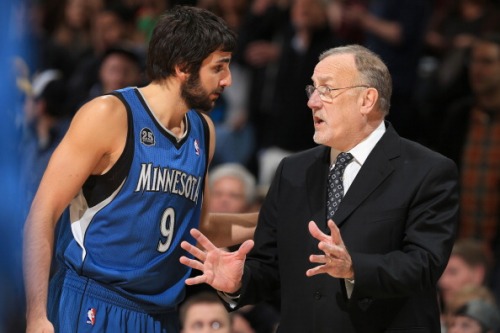 “I thought he was really active, but… this group has, uh… How do I put it?

When we’re 28 or 25 points up, we don’t need to score quick. I mean, we don’t have to make HERO PLAYS. We threw the ball away in the third quarter and even the last possession with a minute to go, we steal it, and Ricky throws that pass out of bounds trying to get it to Kevin–WHY?

Sooner or later that’s gonna cost you the game! We have to have more discipline in what we do. I don’t care what the score is, and that’s what we have to learn. It’s hurt us in the past and it will hurt us again.”

A leading question about Ricky Rubio’s good performance was posed to Rick Adelman.

It was supposed to elicit praise.

Instead, he got worked up.

Adelman’s team had just beaten the Pistons in convincing fashion. His starters dominated almost every second they touched the floor. Rubio in particular played well, nearly compiling a triple double (11 points, 9 assists, 8 rebounds) in just under 36 minutes of action. Ricky’s 3 turnovers were offset by the same number of steals.

Rather than focus on the positives (which he explicitly said that he was going to do, a moment earlier in response to a question about his bench’s struggles) Adelman went on this vague, critical rant about “this group” that seemed — in context — a lot more like a thinly veiled, direct shot at Ricky Rubio.

If you have been following this Timberwolves season with any interest, you’ve noticed a simmering tension between Ricky Rubio’s playing style and Rick Adelman’s offensive vision. The tension is manifested in three ways:

First is the offense itself.

When Rubio arrived in 2011, there was an abbreviated training camp due to the lockout and shortened season.  There was not enough time to install the complex, high-post entry offense that Adelman has long used with success. Furthermore, the Timberwolves roster was not replete with basketball intelligence. Players such as Anthony Randolph, Derrick Williams, and Michael Beasley were better off in simpler sets. So instead they ran high pick and rolls, which required Rubio to initiate most plays. He would peel around those picks with his head on a swivel and you never knew what was coming next.

Maybe he’d take one hard dribble toward the hoop and kick it out to the strong-side corner for three. Maybe he’d shuffle back to his right and play dumb for a moment, only to slide a bounce pass through a couple defenders to the roll man, for an easy dunk. Once that threat was established, he’d whip one of those fastballs across the court to the opposite wing. Three more points. From the top of the key, Ricky might wink at fellow rookie Williams, who would then spin out of his post position for an alley-oop dunk.

We never knew what was coming but we cherished every second of anticipation. And by “we” I don’t just mean Timberwolves fans. Ricky Rubio was universally regarded as the league’s most entertaining player.

But it wasn’t only flash. Ricky was really effective, and the team was (very) surprisingly competitive. The Wolves were 1 game over .500 — just like they are today — when Ricky’s torn knee ligament ended his rookie season. Rubio finished second in the Rookie of the Year voting to Kyrie Irving, despite missing the final 25 games of the season due to his injury.

This year, the offense is much different. Before the season, Adelman publicly challenged Kevin Love to become a facilitator of offense for his teammates. They installed the high-post “corner” (Princeton?) offense that Adelman used in Sacramento and Houston. A typical Timberwolves possession begins with Rubio passing to the wing, who then passes to Love at the high post. Love then surveys the floor for cutters or other scoring opportunities. Love has answered his coach’s call, too. He’s averaging 4.1 assists per game; well above his previous career high of 2.5. He is just outside of LeBron James and Kevin Durant in the MVP race and his team’s offensive rating of 105.3 is pretty good; 9th best in the NBA.

But by running the early offense through Love, Rubio’s best skill is neutralized. He does less dribbling and creating, and more entry-passing and standing. His biggest weakness, scoring, is magnified when defenders shade off of him to help against better scorers like Love and Kevin Martin.

Ricky Rubio is not suited for the offense that Rick Adelman prefers.

The second way that the Rubio-Adelman tension rears its head is in the playing rotations. Rubio is only averaging 31.4 minutes per game. This is less than the 34.2 that he averaged as a rookie; a number that is a little bit misleading due to him not being a starter when that season began.

Adelman has infamously chosen to play J.J. Barea over Ricky Rubio down the stretch of many games; games that were in doubt and that the Wolves ended up losing. The decision seems as much a statement made to Rubio (or about Rubio?) as it is one made to help win games. Barea, after all, is having one of his worst seasons as a pro, and has the worst plus/minus numbers of the team’s regular rotation players. Clearly, Rubio is better than Barea. But perhaps Adelman doesn’t care about that as much as he cares about changing the way Rubio plays, and the strongest way to send a message is by gluing his ass to the bench when he falls out of line. I’m speculating here some, but I wouldn’t be shocked if there is some truth to this.

The third and final way that we observe an Adelman-Rubio tension is by the coach’s public displays of frustration as in last night’s press conference. If you attend Wolves games, maybe you’ve glanced over at the coach after a Ricky drive to the basket ends in a blocked shot. Or, for a better example, you’ve looked at the bench after a flashy Rubio pass ends up in an opponent’s hands.

Adelman goes ballistic. It’s the one thing other than officiating that gets him visibly upset. Sometimes he puts his hands on his head and shakes around in his seat. Other times he gets up and stomps around. But there is always a visible reaction.

He HATES Rubio’s creative decision making. All he wants is the ball delivered to Love, so the offense can do what it’s supposed to. There are not to be audibles called at the line of scrimmage. And Ricky is all about audibles.

I’m not criticizing here; just observing. It’s become obvious that there’s a disconnect in basketball philosophy between this team’s head coach and its point guard. How much it matters, I’m not sure.

In the short term, it leads to decreased minutes for the team’s best guard and probably affects team (and fanbase) morale.

In the long term, the question is whether sharpening Ricky’s focus (if that is what is happening) more than offsets the damage done to his improvisation skills and once-in-a-generation floor vision. It would be a damn shame if all of this ends with Rubio playing out most of his prime as a glorified entry passer.

Big picture, the problem will take care of itself. Adelman will probably retire after this season. We have no idea where Kevin Love will be playing the rest of his career, and it is possible that Flip Saunders will aim to rebuild the roster around Rubio’s playmaking.

But the simmering tension between Adelman and Rubio has been an unexpected and unfortunate subplot to a confusing season, and if nothing else it should be acknowledged.

13 responses to “The Tense Disconnect Between Adelman and Rubio”